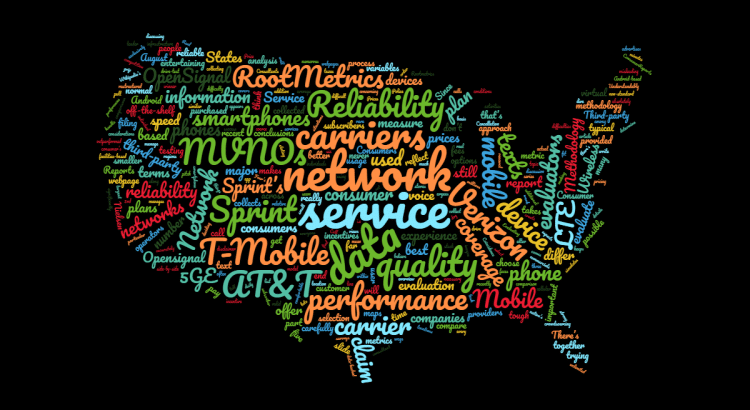 Some of the examples in this article are out-of-date. The wireless industry changes too fast for consumers to get a grip on it.

Most mobile phone subscribers in the United States use networks provided by the “Big Four”: Verizon Wireless, AT&T, T-Mobile, and Sprint.1 In addition to the Big Four, there are many smaller carriers with their own network infrastructure and lots of Mobile Virtual Network Operators (MVNOs).2 MVNOs offer cellular service but use network infrastructure managed by other companies (primarily the Big Four).3 MVNOs include companies like Tracfone, Mint Mobile, and Republic Wireless.

Service quality is tough to evaluate. Some fairly objective variables differ between phone users—e.g., the location a device is used from or the type of phone that is being used. Some subjective considerations also come into play. How important is download speed relative to coverage quality? What makes customer service high-quality? Given all the variables and personal preferences involved, there is no good way to coerce all aspects of service quality into a single, reliable metric for comparison.

Despite the difficulties, some third-party companies try to evaluate service quality. RootMetrics purchases off-the-shelf Android phones and drags them around the United States4 while collecting data about coverage and speed.5 In the most recent report (as of 4/25/2018), RootMetrics concludes:

Based on our testing, Verizon is the undisputed leader in terms of coverage and network reliability.”6
But that’s not the end of the story. Fortunately for the other carriers, there are other third-party evaluators.

Opensignal takes a crowdsourcing approach. It collects and analyzes a huge quantity of performance data from phones used by actual consumers.7 T-Mobile argues that this is a better approach.8 It’s also an approach that makes T-mobile look really good.9 Coincidence?

AT&T bills itself as “The nation’s largest and most reliable network.” On a prominent webpage10 discussing network quality, the reliability claim is paired with this footnote:

Reliability based on voice and data performance from independent 3rd party data.
It’s concerning that AT&T does not tell us where the third-party data comes from.

Sprint is more modest in its claim. Rather than declaring victory, Sprint explains:

Our network reliability is within 1% of Verizon’s and it keeps getting better.11

Sprint’s claim is based on its own analysis of Nielsen data.12

Why do third-party evaluators come to different conclusions? Maybe coverage evaluation is just really hard. Alternatively, maybe market forces are strong enough to create financial incentives for one evaluator to look kindly on each major carrier. (See Third-party Evaluation: Trophies for Everyone!)

Since there are so many evaluators and metrics to choose from, each carrier can come up with a way to claim its service stands out from the competition. Thanks to this tendency, we get commercials with hilarious images like this one where Sprint advertises success on a speed metric. Note the disclaimer explaining that the coverage-map-like visual in the background is not a coverage map.13 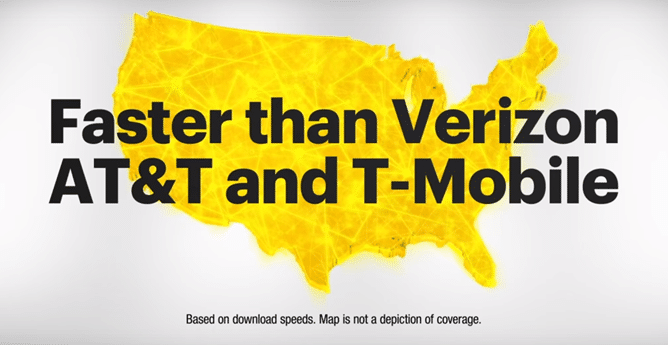 Providers usually have an incentive to make their services look good. Since empirical data can be collected and analyzed in numerous ways, any carrier can come up with data-backed claims about service quality. In rare situations where the usual incentives are reversed, entertaining things can happen.

In a publicly accessible FCC filing used to pitch a potential T-Mobile-Sprint merger, Sprint admits an ongoing series of troubles it has faced. On a slide titled “Sprint’s Network Faces Severe Challenges,” there’s a bullet stating:

Verizon in red, Sprint in yellow 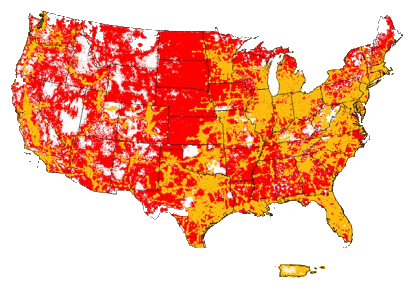 AT&T in blue, Sprint in yellow 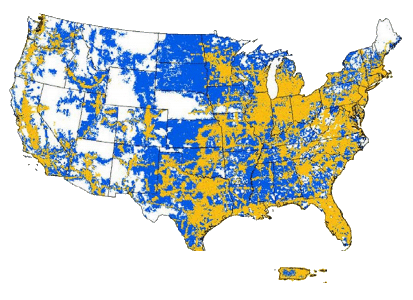 As far as I know, the more rigorous third-party evaluators (i.e., Opensignal and RootMetrics) don’t collect data on MVNOs. Consumer Reports surveys its subscribers and collects data on individuals’ views about their carriers, including a number of MVNOs. Unfortunately, ConsumerReports’ rankings probably aren’t reliable. In a blog post, I go into detail about why I think Consumer Reports’ evaluation methodology is seriously flawed and biased against the Big Four.

Sometimes carriers blatantly mislead customers. For example, AT&T recently began labeling some of its advanced 4G LTE service as “5GE“. Understandably, this pissed off a lot of people, including other major carriers. AT&T’s 5GE service is not 5G. It’s 4G.

It’s a major undertaking for a consumer to figure out the prices he or she would have to pay for service from different carriers. Apples-to-apples comparisons are not always possible. Each carrier has its own way of bundling plans together. There’s no way to compare a 2 line plan with 1,000 minutes of voice, 1 gigabyte of data, and unlimited texts across five different carriers. Consumers are stuck with whatever bundles of options each carrier offers.

A consumer trying to carefully compare five carriers would probably need to choose a few different plans from each carrier and write down the prices of each plan along with details about terms and offerings of each plan.

Putting together all the information necessary to carefully comparison shop is a Herculean task. Lots of important information is hard to find. If a consumer manages to gather all the needed information, he or she still faces the difficulty of deciding which of the plans—each with different characteristics—is the best fit.

If a customer does manage to pull off all the work required, he or she can be almost confident that any conclusions won’t be valid for long. Prices and plans with most carriers will be revamped and restructured by the time a contract is up for renewal.

There are a handful of brands owned and operated by the Big Four (e.g., Cricket Wireless, Metro, Visible). Sometimes these brands are referred to as “MVNOs”, but the term “flanker brand” may be a more accurate description.