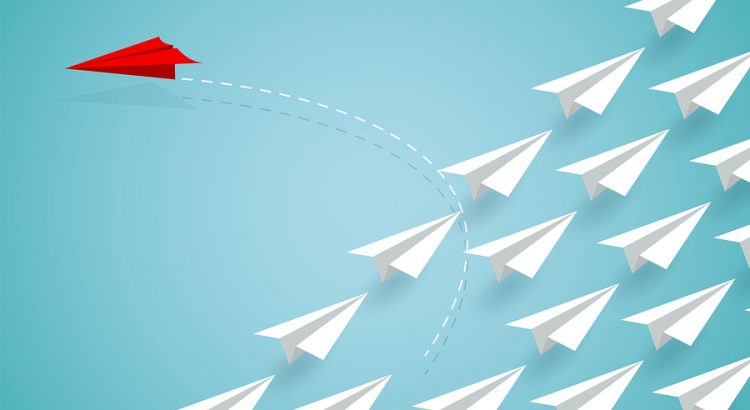 As a reminder, we announced in July that we had signed a new agreement with Verizon and terminated our agreement with T-Mobile. At that time, we detailed an eighteen-month phase-out period ending December 2020, during which time we could support existing subscribers on T-Mobile, but, starting December 19th of this year, not add new ones. We also warned there would be significant expense and risk involved in migrating about 160,000 subscribers away from T-Mobile by the end of that phase out period.

I am pleased to report that we have reached a subsequent agreement with T-Mobile and a mobile virtual network enabler (or MVNE), named Prepaid Wireless Group (PWG), that essentially eliminates that expense and risk. Prepaid Wireless Group will now be considered our direct provider of T-Mobile network access. The new deal accomplishes a few important things: It extends our ability to support customers on the T-Mobile network for another three years starting this December, with an option to extend further. It allows us to continue to activate subscribers on the T-Mobile network if we choose. And it maintains our current T-Mobile wholesale rates and gives us very reasonable annual revenue guarantees.

With this deal, we no longer have any urgency to migrate these subscribers away from T-Mobile, and no reason to incur expensive incentives going forward to do so. We will now add Verizon with much less rush. We will think about what is best for both our incoming and existing subscribers, and our business across all three of our networks; Sprint, Verizon and T-Mobile. With very achievable guarantees across all three in the coming years, we also put ourselves in a position to see the outcome of the still unresolved Sprint/T-Mobile situation and be able to watch the landscape evolve.

We’ve recently come to a new agreement that should allow us to continue to offer Ting GSM service with no interruption for existing Ting GSM users for many years to come. It’s true that this does clash with some of the messaging we’ve had of late, but our strategy of moving as many otherwise-eligible people off of Ting GSM and onto Ting CDMA as possible has not changed.

I’m still excited for Ting to launch its Verizon-based service, but I don’t know if we’ll see that service become available before the end of 2019. 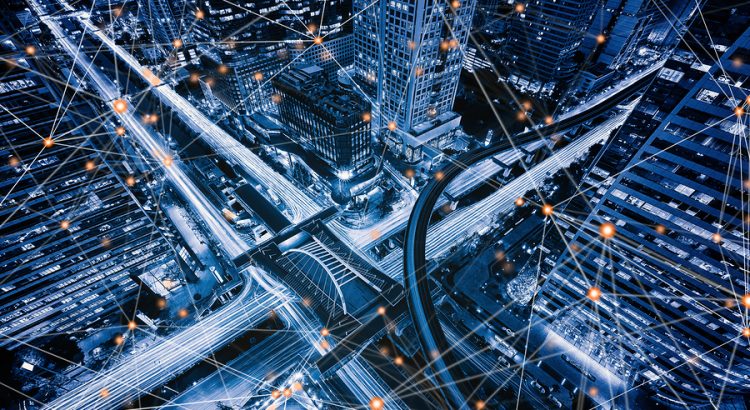 Near the beginning of the report, Tutela shares some reflections on how the MVNO landscape is changing:1

The approach Tutela used to evaluate MVNOs was in line with its usual methodology. The company crowdsourced performance data from typical consumers with the help of code embedded in Tutela’s partners’ apps. In the new report, Tutela primarily considers how well MVNOs performed in regions where at least three of the big four networks offer coverage. Tutela calls these core coverage areas.2 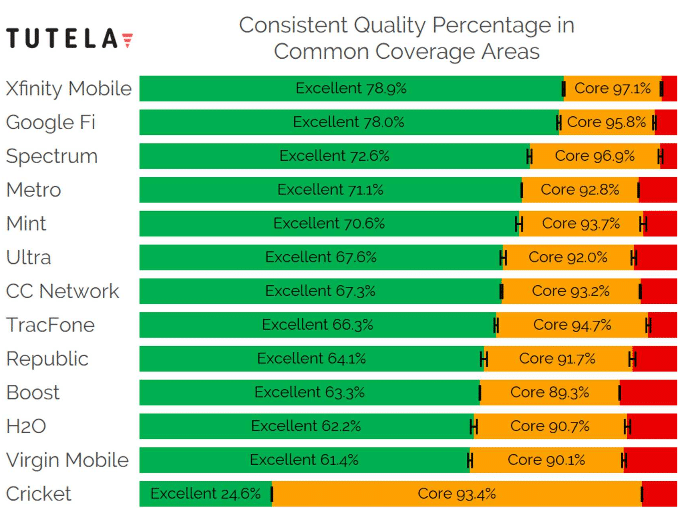 To Tutela’s credit, the company acknowledges the possibility of selection bias in at least one case:4

Several MVNOs offer access to Wi-Fi hotspots in addition to cellular networks. I’ve been curious how much data carriers send over Wi-Fi, and Tutela’s results give an estimate. While Xfinity Mobile appears to have sent the largest share of its data via hotspots, it’s a smaller share than I expected:5 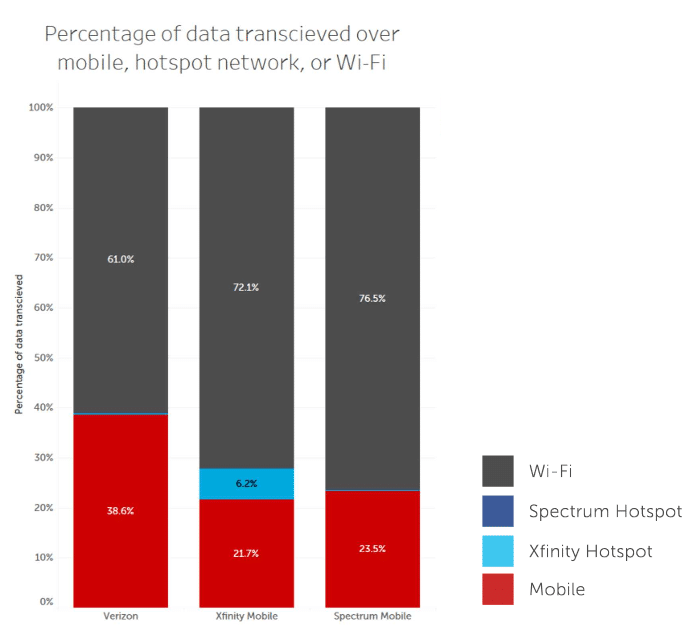 There were a few other bits of the report that I found especially interesting. In one section, the report’s authors reflect on the fast growth of MVNOs run by cable companies:7

In another part of the report, Tutela shares a map displaying the most common host network that Google Fi subscribers access. It looks like there are a decent number of areas where Sprint or U.S. Cellular provide the primary host network:8 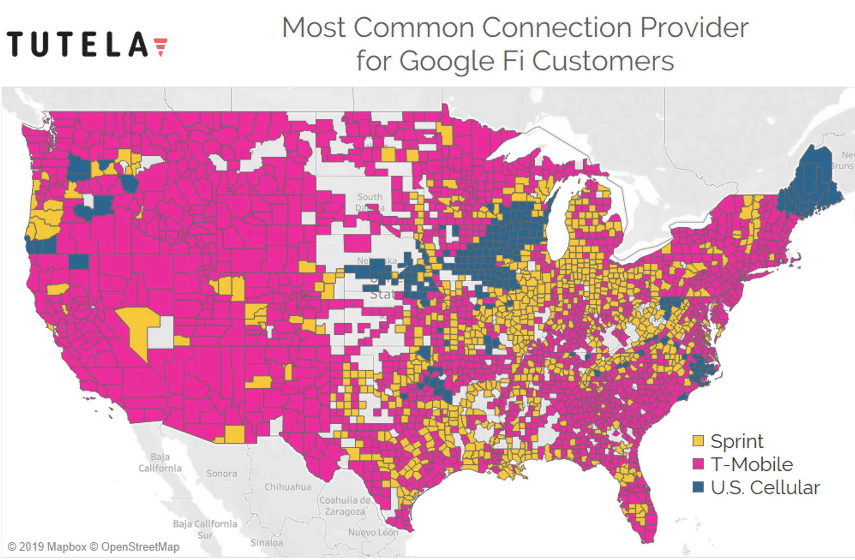 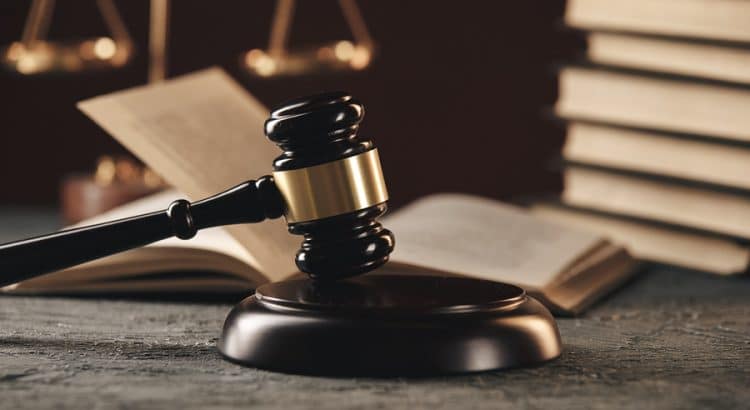 AT&T has settled with the Federal Trade Commission (FTC) and agreed to pay out $60 million to current and past customers that may have been affected by misleading claims about unlimited data. The settlement is in response to the FTC’s 2014 accustation that AT&T failed to adequately disclose that customers on unlimited data plans could have their speeds throttled substantially. Here are a few bits from the 2014 FTC complaint:

The FTC’s complaint alleges that the company failed to adequately disclose to its customers on unlimited data plans that, if they reach a certain amount of data use in a given billing cycle, AT&T reduces – or “throttles” – their data speeds to the point that many common mobile phone applications – like web browsing, GPS navigation and watching streaming video – become difficult or nearly impossible to use…AT&T’s marketing materials emphasized the ‘unlimited’ amount of data that would be available to consumers who signed up for its unlimited plans…AT&T, despite its unequivocal promises of unlimited data, began throttling data speeds in 2011 for its unlimited data plan customers after they used as little as 2 gigabytes of data in a billing period. According to the complaint, the throttling program has been severe, often resulting in speed reductions of 80 to 90 percent for affected users. Thus far, according to the FTC, AT&T has throttled at least 3.5 million unique customers a total of more than 25 million times…consumers in AT&T focus groups strongly objected to the idea of a throttling program and felt ‘unlimited should mean unlimited.’

Here’s an excerpt from the FTC’s press release from today (emphasis mine):

As part of the settlement, AT&T is prohibited from making any representation about the speed or amount of its mobile data, including that it is “unlimited,” without disclosing any material restrictions on the speed or amount of data. The disclosures need to be prominent, not buried in fine print or hidden behind hyperlinks. For example, if an AT&T website advertises a data plan as unlimited, but AT&T may slow speeds after consumers reach a certain data cap, AT&T must prominently and clearly disclose those restrictions.

I’m glad to see the FTC cracking down on misleading practices. Bogus “unlimited” plans seem to be much more common today than they were in 2014.