While RootMetrics describes its approach as “transparent,”1 I have found the public information to be far from comprehensive. RootMetrics’ methodology web page leaves me with open questions, and I did not receive a response when I reached out for additional information.

RootMetrics collects data on the performance of major networks using off-the-shelf, Android phones. As I understand it, RootMetrics aims to conduct its tests with the best commercially available phones from each carrier.2 Network performance data is collected while test devices engage in common activities like web browsing, calling, and texting.3 My impression is that RootMetrics primarily engages in drive-testing—dragging the phones along U.S. roadways while collecting performance data.4 RootMetrics also has an app anyone can install to contribute to crowdsourced data. RootMetrics’ methodology page indicates that the company sometimes engages in testing indoors and at event venues.5

Unfortunately, RootMetrics is frustratingly vague about how different parts of its testing factor into its final results. The following statement is found on the methodology page:

“After the tests are evaluated for accuracy, the results are converted into scores using a proprietary algorithm.”

As someone who has been involved in creating ranking algorithms for use in third-party evaluations, I doubt the algorithm is proprietary because it’s a clever trade secret. More likely, revealing the algorithm could reduce people’s faith in RootMetrics. Creating good, broad-purpose ranking algorithms that aggregate scores from multiple categories is often infeasible.

RootMetrics claims to measure performance with roaming enabled.6 This is probably a good thing for consumers using RootMetrics’ reports to assess the performance of services purchased directly from one of the Big Four operators (AT&T, Verizon, Sprint, and T-Mobile). However, this may complicate assessments of mobile virtual network operators that resell access to Big Four networks but generally do not have the same roaming agreements.

Since users of one network probably differ on average from users on other networks, it’s possible that crowdsourced data may capture differences between users and devices rather than true differences in network performance. I believe RootMetrics mostly avoids these issues in its drive tests. First, the drive tests bring phones from each network to the same places. This alleviates most of my concerns about selection bias coming from geographic differences. Additionally, the drive tests make use of high-end devices from all carriers. This makes me less concerned that low-cost carriers are at a disadvantage because their networks are disproportionately accessed via old or low-cost devices.7 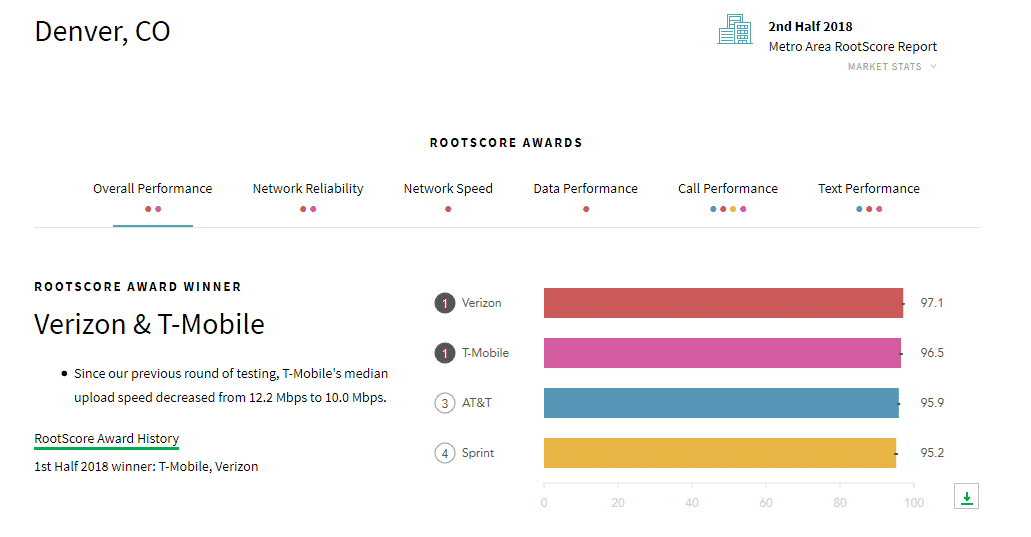 The reports are visually appealing, and it’s easy to navigate between categories. That said, it’s difficult to understand the implications of the reports. What should be made of the scores on the 0-100 scale? RootMetrics doesn’t clearly explain the unit they’ve created.8 Even scores for specific categories use the mysterious 0-100 scale.

RootMetrics sometimes declares ties when scores are slightly different but very close. However, it’s not clear what ties mean. I expect it means something like “after using statistical methods we don’t publicly disclose, we determined that we couldn’t reject the null hypothesis of no difference in performance scores at α=0.05.” That may mean something very different from “we called this a tie because we don’t think the typical consumer would perceive a difference in performance between these networks.” I expect most people looking at RootScore reports will have an interpretation closer to the latter.

RootMetrics offers a free app that individual can use to explore and/or contribute to RootMetrics’ performance data. When exploring data, users can select the carrier they’re interested in and then choose one of three map layers: call performance, fastest speed found, or best technology found. The map is split into small hexagonal regions. Any single region can be selected to view information about performance within the region and the number of data points collected in the region. Within the data-performance layer, it’s possible to view average download and upload speeds measured in a given region.

If you work for RootMetrics and can answer any of these questions, please reach out.