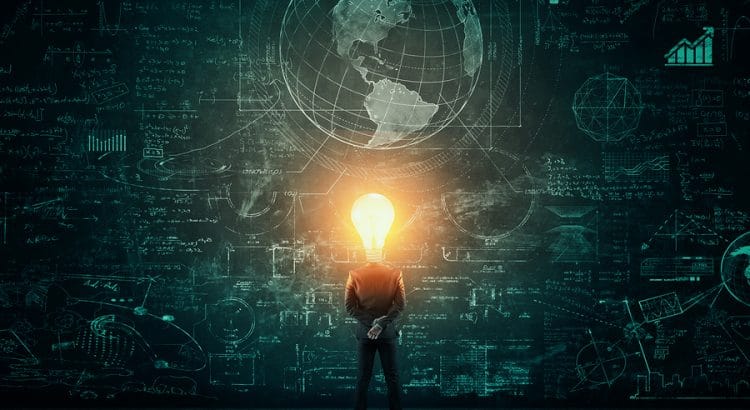 I recommend reading this post on my personal blog instead of this page.1
Following an idea to its logical conclusion might be extrapolating a model beyond its valid range.John D. Cook

I spent about two and a half years as a research analyst at GiveWell. For most of my time there, I was the point person on GiveWell’s main cost-effectiveness analyses. I’ve come to believe there are serious, underappreciated issues with the methods the effective altruism (EA) community at large uses to prioritize causes and programs. While effective altruists approach prioritization in a number of different ways, most approaches involve (a) roughly estimating the possible impacts funding opportunities could have and (b) assessing the probability that possible impacts will be realized if an opportunity is funded.

This post is long, so I’ve separated it into several sections:

The counterintuitive phenomenon of the optimizer’s curse was first formally recognized in Smith & Winkler 2006.

Smith and Winkler refer to the difference between the expected value of an activity and its realized value as “postdecision surprise.”

The optimizer’s curse occurs even in scenarios where estimates of expected value are unbiased (roughly, where any given estimate is as likely to be too optimistic as it is to be too pessimistic2). When estimates are biased—which they typically are in the real world—the magnitude of the postdecision surprise may increase.

I believe effective altruists should find this extremely concerning. They’ve considered a large number of causes. They often have massive uncertainty about the true importance of causes they’ve prioritized. For example, GiveWell acknowledges substantial uncertainty about the impact of deworming programs it recommends, and the Open Philanthropy Project pursues a high-risk, high-reward grantmaking strategy.

The optimizer’s curse can show up even in situations where effective altruists’ prioritization decisions don’t involve formal models or explicit estimates of expected value. Someone informally assessing philanthropic opportunities in a linear manner might have a thought like:

Thing X seems like an awfully big issue. Funding Group A would probably cost only a little bit of money and have a small chance leading to a solution for Thing X. Accordingly, I feel decent about the expected cost-effectiveness of funding Group A.

Although the thinking is informal, there’s uncertainty, potential for bias, and an optimization-like process.3

The optimizer’s curse hasn’t gone unnoticed by impact-oriented philanthropists. Luke Muehlhauser, a senior research analyst at the Open Philanthropy Project and the former executive director of the Machine Intelligence Research Institute, wrote an article titled The Optimizer’s Curse and How to Beat It. Holden Karnofsky, the co-founder of GiveWell and the CEO of the Open Philanthropy Project, wrote Why we can’t take expected value estimates literally. While Karnofsky didn’t directly mention the phenomenon of the optimizer’s curse, he covered closely related concepts.

Here’s what Smith & Winkler propose (I recommend skipping it if you’re not a statistics buff):7

For entities with lots of past data on both the (a) expected values of activities and (b) precisely measured, realized values of the same activities, this may be an excellent solution.

In most scenarios where effective altruists encounter the optimizer’s curse, this solution is unworkable. The necessary data doesn’t exist.8 The impact of most philanthropic programs has not been rigorously measured. Most funding decisions are not made on the basis of explicit expected value estimates. Many causes effective altruists are interested in are novel: there have never been opportunities to collect the necessary data.

The alternatives I’ve heard effective altruists propose involve attempts to approximate data-driven Bayesian adjustments as well as possible given the lack of data. I believe these alternatives either don’t generally work in practice or aren’t worth calling Bayesian.

To make my case, I’m going to first segue into some other topics.

In my experience, members of the effective altruism community are far more likely than the typical person to try to understand the world (and make decisions) on the basis of abstract models.9 I don’t think enough effort goes into considering when (if ever) these abstract models cease to be appropriate for application.

This post’s opening quote comes from a great blog post by John D Cook. In the post, Cook explains how Euclidean geometry is a great model for estimating the area of a football field—multiply field_length * field_width and you’ll get a result that’s pretty much exactly the field’s area. However, Euclidean geometry ceases to be a reliable model when calculating the area of truly massive spaces—the curvature of the earth gets in the way.10 Most models work the same way. Here’s how Cook ends his blog post:11

Most models do not scale up or down over anywhere near as many orders of magnitude as Euclidean geometry or Newtonian physics. If a dose-response curve, for example, is linear for observations in the range of 10 to 100 milligrams, nobody in his right mind would expect the curve to remain linear for doses up to a kilogram. It wouldn’t be surprising to find out that linearity breaks down before you get to 200 milligrams.

In a brilliant article, David Chapman coins the term “wrong-way reduction” to describe an error people commit when they propose tackling a complicated, hard problem with an apparently simple solution that, on further inspection, turns out to be more problematic than the initial problem. Chapman points out that regular people rarely make this kind of error. Usually, wrong-way reductions are motivated errors committed by people in fields like philosophy, theology, and cognitive science.

“If we had [a thing we don’t usually have], then we could [apply a simple strategy] to authoritatively solve all instances of [a hard problem].”

People advocating wrong-way reductions often gloss over the fact that their proposed solutions require something we don’t have or engage in intellectual gymnastics to come up with something that can act as a proxy for the thing we don’t have. In most cases, these intellectual gymnastics strike outsiders as ridiculous but come off more convincing to people who’ve accepted the ideology that motivated the wrong-way reduction.

I spent a lot of my childhood in evangelical, Christian communities. Many of my teachers and church leaders subscribed to the idea that the Bible was the literal, infallible word of God. If you presented some of these people with questions about how to live or how to handle problems, they’d encourage you to turn to the Bible.12

In some cases, the Bible offered fairly clear guidance. When faced with the question of whether one should worship the Judeo-Christian God, the commandment, “You shall have no other gods before me”13 gives a clear answer. Other parts of the Bible are consistent with that commandment. However, “follow the Bible” ends up as a wrong-way reduction because the Bible doesn’t give clear answers to most of the questions that fall under the umbrella of “How should one live?”

Is abortion OK? One of the Ten Commandments states, “You shall not murder.”14 But then there are other passages that advocate execution.15 How similar are abortion, execution, and murder anyway?

Should one continue dating a significant other? Start a business? It’s not clear where to start with those questions.

I intentionally used an example that I don’t think will ruffle too many readers’ feathers, but imagine for a minute what it’s like to be a person who subscribes to the idea that the Bible is a complete and infallible guide:

You see the hard problem of deciding how to live has a demanding but straightforward solution! You frequently observe people—including plenty of mainstream Christians— experience failure and suffering when their actions don’t align with the Bible’s teachings.

You’re likely in a close-knit community with like-minded people. Intelligent and respected members of the community regularly turn to the Bible for advice and encourage you to do the same.

When you have doubts about the coherence of your worldview, there’s someone smarter than you in the church community you can consult. The wise church member has almost certainly heard concerns similar to yours before and can explain why the apparent issues or inconsistencies you’ve run into may not be what they seem.

A mainstream Christian from outside the community probably wouldn’t find the rationales offered by the church member compelling. An individual who’s already in the community is more easily convinced.16

It’s not a novel proposal. People have been saying versions of this for a long time. The term Knightian uncertainty is often used to distinguish quantifiable risk from unquantifiable uncertainty.

As I’ll illustrate later, we don’t need to assume a strict dichotomy separates quantifiable risks from unquantifiable risks. Instead, real-world uncertainty falls on something like a spectrum.

Nate Soares, the executive director of the Machine Intelligence Research Institute, wrote a post on LessWrong that demonstrates the wrong-way reduction I’m concerned about. He writes:17

I don’t think ignorance must cash out as a probability distribution. I don’t have to use probabilistic decision theory to decide how to act.

Here’s the physicist David Deutsch tweeting on a related topic: 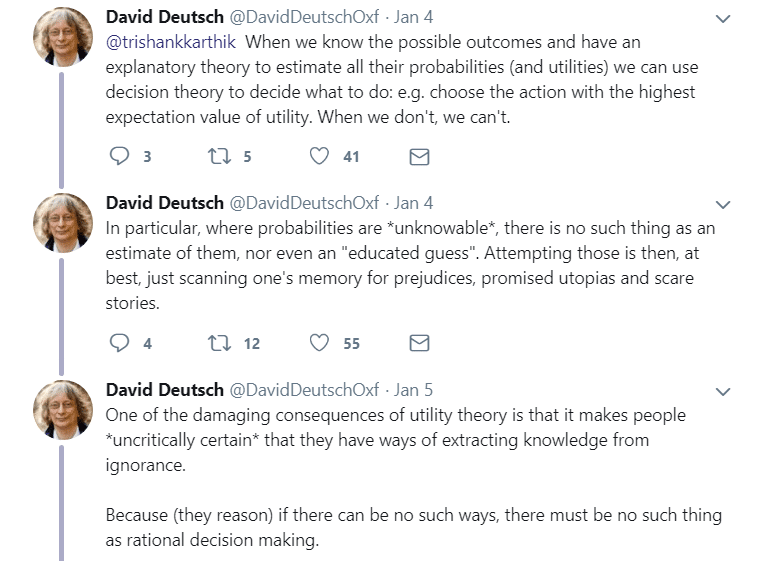 Probability is, as far as we know, an abstract mathematical concept. It doesn’t exist in the physical world of our everyday experience.18 However, probability has useful, real-world applications. It can aid in describing and dealing with many types of uncertainty.

I’m not a statistician or a philosopher. I don’t expect anyone to accept that position based on my authority. That said, I believe I’m in good company. Here’s an excerpt from Bayesian statistician Andrew Gelman on the same topic:19

Probability is a mathematical concept. To define it based on any imperfect real-world counterpart (such as betting or long-run frequency) makes about as much sense as defining a line in Euclidean space as the edge of a perfectly straight piece of metal, or as the space occupied by a very thin thread that is pulled taut. Ultimately, a line is a line, and probabilities are mathematical objects that follow Kolmogorov’s laws. Real-world models are important for the application of probability, and it makes a lot of sense to me that such an important concept has many different real-world analogies, none of which are perfect.

Consider a handful of statements that involve probabilities: