Note: I haven’t finished updating this article to account for Verizon’s recent launch of C-Band 5G. You can find more details about Verizon’s C-Band 5G coverage in one of my blog posts.

The coverage map below comes from Verizon. You can view a better, interactive version of the map on Verizon’s website.

To date, Verizon has focused on rolling out 5G Nationwide in relatively populated areas. While 5G Nationwide covers most Americans (about 230 million by Verizon’s estimate), the service covers far less than 50% of the United States by land area.

Millimeter wave 5G is not good for covering large areas. The signals don’t travel far and struggle to penetrate buildings’ walls. As a result, Verizon’s 5G service is only available in small portions of the cities where it’s offered. For the most part, Verizon has tried to cover busy, outdoor areas.

To view Verizon’s millimeter wave coverage, you have to open Verizon’s coverage map and zoom in on one of the cities marked with a dark red dot. Once you’ve zoomed in sufficiently, you’ll see dark red shading that indicates where millimeter wave 5G coverage is available. Here’s what the map looks like when zoomed in on Chicago:1 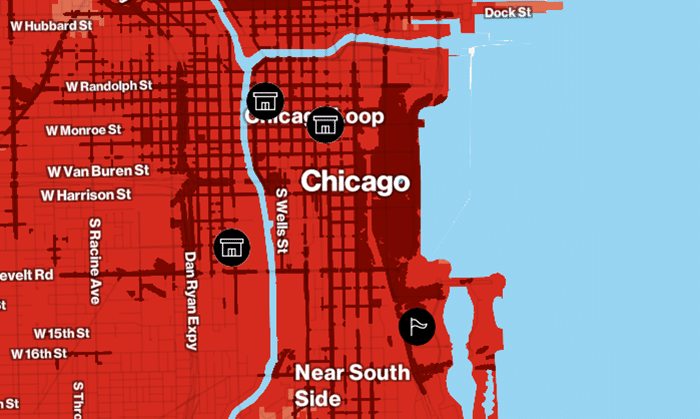 In many cities, lighter shades (indicating technologies other than 5G mmWave) will dominate the map.2

According to Verizon, millimeter wave 5G is available in parts of over 60 stadiums. Verizon has suggested the coverage tends to be concentrated in the lower seating areas at these venues.5

Millimeter wave coverage is also available in parts of these airports:6

Verizon will substantially expand its 5G coverage over the next few years. While millimeter wave 5G will never be used to cover the majority of the U.S., I anticipate seeing the service in more cities.

While Verizon’s sub-6 5G already covers 200 million Americans, it still only covers a small portion of the U.S. by land area. Over time, Verizon will increasingly transition to offering 5G in areas where it only offers 4G at the moment.

Verizon’s 5G relies on a handful of spectrum bands that only a handful of recent phones are compatible with:
Millimeter wave 5G:

Verizon’s 5G vs. the competition

Verizon, AT&T, and T-Mobile all cover over 200 million people with low-band 5G. It’s difficult to make firm statements since the 5G landscape is changing quickly, but I believe T-Mobile leads on low-band coverage, while AT&T and Verizon beat T-Mobile on low-band speeds. On mid-band coverage, T-Mobile is dominating.

Verizon sells one 5G-compatible mobile hotspot: the MiFi M2100 5G UW. I own the device, and I’m a fan. Verizon’s 4G hotspots may be a more cost-effective option for people that don’t feel the need for the latest tech or best-possible speeds.

Verizon’s 5G Nationwide service is available at no extra charge for all subscribers with compatible devices on both postpaid and prepaid plans:9

As of 10/13/20, all Verizon monthly mobile plans and prepaid plans include access to our 5G Nationwide network.

5G Ultra Wideband service is included for free on a few of Verizon’s premium plans:10

Speeds with Verizon’s 5G services will vary widely. Factors like the kind of device being used, the strength of the 5G signal, and the frequency of the 5G signal will all come into play.

In most cases, Verizon’s 5G Nationwide service won’t deliver speeds that are a whole lot faster than subscribers are used to with 4G connections. With a strong signal from Verizon’s Nationwide 5G subscribers are likely to see speeds in the 50Mbps to 200Mbps range. Here’s a couple results from speed tests I ran: 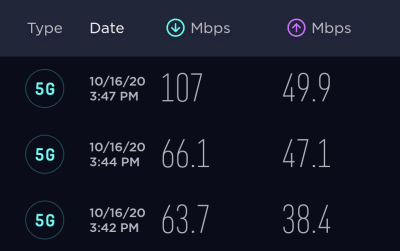 With Verizon’s Ultra Wideband, speeds are much more impressive. Here’s one of my most impressive millimeter wave speed test results: 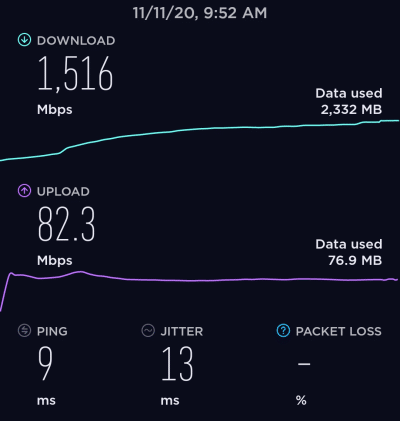 Verizon has claimed it’s millimeter wave service is capable of impressive, 8x carrier aggregation. The excerpt below comes from a press release Verizon shared on December 17, 2020:

Using advanced technology called Carrier Aggregation, Verizon’s 5G Ultra Wideband network is reaching 4 Gbps peak speeds in some locations…Verizon combined eight separate channels of mmWave spectrum to achieve multi-gigabit speeds in parts of some cities. Using this technology, customers can see double the download speeds they have historically experienced on 5G Ultra Wideband, with peak speeds up to 4 Gbps possible in some locations. Customers will also see a boost in speeds with two carrier aggregation now available for uploads.